This stunning image of the Rainbow Serpent painted under a rock overhang near Mr Borradaile in Arnhem Land is thought to be the largest ever discovered in northern Australia. For Ros and Tim Bowden it was the precursor to three days of joyous discoveries with Davidsons Arnhemland Safaris. 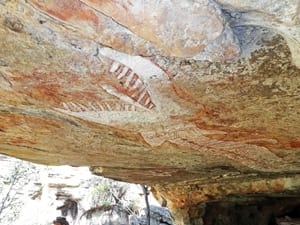 After touching down on the gravel airstrip, we were whisked away in an open sided Toyota Troopy to the resort and taken to our cabin. Our new home had no windows – just surrounds of mosquito-proof netting – and no lock on the door: why bother in such user-friendly surrounds?

After a friendly cuppa we were driven away for the morning tour with our well-informed and genial guide Scott Adams, who soon had us acquainted with the superb rainbow serpent and other brilliant rock art that seemed to adorn every rock overhang. The most weather-sheltered spots featured a rather crowded
canvas, where newer images had been painted over older ones.

We had come from the chill of winter in New South Wales to pleasant daytime dry season temperatures of 32 degrees C. Back for an air-conditioned lunch at noon, we were introduced to the very civilised routine of retreating to our cabin, and having a siesta under lazily rotating ceiling fans before our afternoon foray began at 3:30 pm. This time we took to the water in an aluminium punt, propelled by a gently purring outboard, to cruise channels that were due to become isolated billabongs as the waterways dried up as the dry season progressed.

However, the plains were still lush and green, and waterbirds large and small flew languidly away as we passed by. One of he smallest, I was amused to hear from Scott, was known as the Jesus bird, because it seemed to walk on water! Thanks to its long, spindly toes the Comb-crested Jacana’s  body can be safely supported by floating water lily leaves, on which it hopped cheekily about.

Without warning, Scott gunned the outboard and suddenly shot up what looked like an extremely small creek. He needed the extra speed to stop the propeller being fouled by weed and we seemed to be heading cross-country, with the reeds on either side looming over us. Clearly he had done this before and
after some nifty navigation we came out into open water and moored the boat beside some rocks.

From there, we walked and did some rock scrambling to get up the escarpment. We were soon at a rocky site, with round grinding holes on a flat rock and on our way to a cave that had been re-discovered in 2002 by Max Davidson and his companion, geologist James Robertson.

The two men had climbed up, looking for obvious caves and rock art sites, and at one stage one went left and one went right. There wasn’t much to see on the right, but the cave on the left – now rather prosaically known as Left Hand Cave – was a ripper. A harbinger of goodies to come, a small panel of paintings marked the entrance. This had obviously been an occupied shelter and we saw evidence of a burial site, with a human skull on the ground, that had probably been dislodged from a rock crevice by a dingo. Custodian Charlie Mangulda had cleared the cave for people to visit because he considered the burial site not particularly important or significant.

We inspected a rich variety of rock art nearby, some of which was relatively recent, as the depiction of a sailing ship, painted over obviously older images, made clear. This was the first of many such images of early European contact we saw at later sites.

The use of hand prints goes back many thousands of years. However, in other art sites in northern Australia from the Kimberley across to the Northern Territory I have never seen forearms included, which is a common feature of Mt Borradaile indigenous art

Our morning excursion was to an area known as the Thylacine art site. The Tasmanian Tiger was wiped out by the early 1930s in response to a bounty put on their heads for killing sheep – later revealed as spurious – but the Thylacine had been extinct on mainland Australia for centuries before. Thylacine images do show up in indigenous art, and I recall seeing depictions of Thylacines in the Kimberley some years ago. (There is also a Thylacine rock engraving at the Calvert Range, in central WA – Ed.)

Our guide Scott was constantly keeping us up to date with bush medicine botany. He had us taste a small, hard fruit, apparently bursting with ginormous quantities of Vitamin C. It was also very bitter, and despite a warning to be careful I fanged it a bit too enthusiastically and could not get rid of the acrid taste until Scott produced a welcome orange with morning tea.

Ros had scratched her leg on a sandstone rock and Scott stemmed the bleeding with a leaf used by local people.  A section of the leaf’s outer layer is peeled back, exposing a thin membrane, which Scott placed over Ros’ abrasion, leaving a piece of the original leaf at each end like a Band-Aid. This bush repair stemmed the bleeding and disappeared as the wound healed over in the next 36 hours.

After lunch and another welcome siesta, we headed out in the late afternoon on the water, where lazy saltwater crocodiles sunbathed on the billabong banks, their mouths slightly agape to cool down in the afternoon heat. They were completely oblivious to our boat getting to with a few metres of them. At the top of the food chain, what did they have to worry about? It came as a shock to
realise this was our last day. I had asked to visit one of the more remote areas at Mt Borradaile, rather ominously known as The Catacombs. With a certain amount of rock-scrambling in this three-hour walk, Tina Jensen was my guide and Diana Davidson, one of the owners of Davidson Arnhem Land Safaris, decided to accompany us.

Our last afternoon excursion was by boat, to the lower slopes of Mr Borradaile itself: a location where we were only permitted to see a certain number of cave art sites. Our last cave of the day and of our Mt Borradaile adventures turned out to be the most interesting of our final day.

It was hard to believe our three days in this very special part of Arnhem Land were all but over. Mt Borradaile was on my bucket list and now that I have clocked up 81 years, it must also be noted that there is nothing significant on the list! For the moment anyway…