The FJ Cruiser was described by its designers as a modern interpretation of a Toyota classic; the FJ40 two-door wagon that was produced from 1960 until 1984. Sadly, the FJ production ended in August 2016. Its FJ-inspired features included angular lines, round headlights set either side of a wide, mesh grille, an upright windscreen with three wiper blades, a white roof and wrap-around rear corner windows. 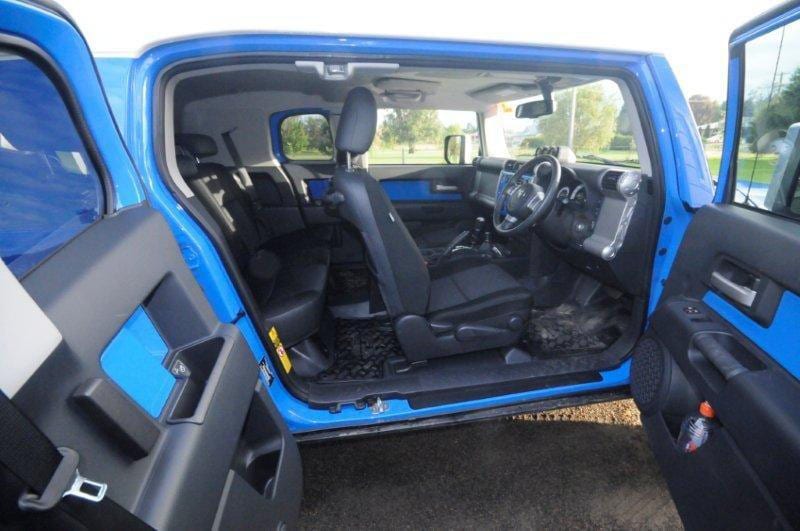 Toyota provided easy entry to the second row of seats by incorporating rear-opening ‘suicide’ access doors, while retaining the two-door style of the original FJ. The FJ Cruiser had an eight-speaker audio system with a single CD player and the ceiling headliner was an integral part of the speaker system The system also featured a USB port for iPod connectivity, 3.5mm input jack for other MP3 players and Bluetooth for mobile phone hands-free use and audio streaming.

While the new FJ had design features that mimicked those of the original the mechanical package had more in common with the US-market 4Runner and the Prado than with Toyota’s FJ40 successor, the 70 Series. Being a US-market-derived model the FJ came with a petrol-engine only powertrain: 200kW/380Nm four-litre V6 with five-speed automatic transmission, 72-litre fuel tank (when launched), part-time 4WD, electrically activated rear differential lock and switchable traction control.

Local testing contributed to recalibration of the all-coil suspension and power steering to suit Australian conditions. Standard wheels were 17-inch aluminium, with 70-profile tyres. Local testing also resulted in the addition of grab handles on the back of the driver and front-passenger seats to improve comfort for rear-seat passengers.

Nine exterior colours were offered, including the hero colours Voodoo Blue and Hornet Yellow, with a white roof.

In early 2013 Toyota more than doubled the FJ Cruiser’s fuel tankage and added CRAWL to its off-road control system.

The  FJ Cruiser’s fuel-tank capacity was expanded to 159 litres with the 72-litre main tank supplemented by an 87-litre sub-tank. A claimed combined-cycle fuel consumption of 11.4 litres/100km resulted in a range of almost 1400km.

Off-road driving smoothness was greatly enhanced by the CRAWL function that was originally introduced on the LandCruiser 200 Series. It was a ‘feet-off’ control system that helped the vehicle negotiate severe or slippery terrain, without  jerky, on-and-off progress. A speed-selector dial on the overhead console provided a choice of five speeds.

CRAWL engaged in L4 (low-range) and temporarily disengages at speeds above 25km/h, or above 10km/h when the rear differential was locked. It  automatically maintained a uniform vehicle speed uphill and downhill, minimising wheel spin and tyre lock-up by controlling both engine output and brake hydraulic pressure, allowing the driver to concentrate fully on steering the vehicle.

For 2014 the FJ picked up a new wheel design and a colour based on the original blue – Retro Blue – was added to the pallette. The front doors were quite long, so entry and exit were easy in unrestricted spaces, but tight car parks could be a challenge.

The rear doors opened from the forward end and could not be opened unless the front doors were opened, which was a nuisance when rear-seat occupants needed to get out.

Car parks posed a particular problem, because when the front and rear doors were opened at the same time the vehicle occupants were trapped in a vee-shaped space. Exit strategy and planning were necessary!

Once aboard and on the move FJ Cruiser occupants travelled in surprising comfort. Front and rear seats were supportive with plenty of head and leg room and while the back seat was best for two adults, three could squeeze in for day trips.

As befitted a retro-cruiser that was most likely to be city-based, the sound system was first rate and supplemented by Bluetooth functions, including wireless music connection from an iPhone or Android smart phone.

Controls and knobs were fattish retro-designs that functioned well. Vision wasn’t as compromised as you might think from looking at the low windscreen, and triple washers/wipers made a clean sweep of the glass.

The world’s smallest wiper cleared the back slit, but rear vision was aided by a camera.

The FJ Cruiser was a very comfortable touring vehicle, albeit with woolly steering that was vague in the straight-ahead position. The five-speed automatic box shifted smoothly and was easily stick-stirred for some sporting driving or for selecting low gears for engine braking or when off-road.

Ride and handling were very good. The FJ took bumps without pitching and anti-sway bars kept cornering stance quite flat. However, the suspension calibrabration was for a relatively light load and a full cargo area sent the stern into droop mode.

Stability control made up to some extent for a part-time 4WD system that worked only in rear wheel drive on high-friction surfaces.

Towing power and torque weren’t issues and engine braking on long descents was quite good. Braking power was adequate. The rear vision camera projected a small picture on the rear vision mirror and this proved quite useful when coupling up to an Adria test caravan.

With the transfer case in low range and the rear diff locked the FJ Cruiser became a useful off-road machine, but progress in rocky terrain was restricted by poor front end ground clearance.

Standard tyres were passenger car types and serious bush travellers would be advised to replace them with light truck rubber.

Fat rubber and plenty of grunt made the FJ Cruiser an ideal beach sand machine. The stability control system could be switched off for sand driving, so that it didn’t reduce momentum when climbing dunes.

Our Toyota FJ Cruiser test vehicles seemed to polarise opinions: people loved them or hated them, but they turned more heads and prompted more comment than any other vehicles we’ve tested. If you like the retro concept FJ has few compromises. We tested the CRAWL function and were greatly impressed by the way it took over control during very steep descents.

Engine braking from a petrol/auto box combination wasn’t as good as a diesel/manual setup, but CRAWL made up for the lack of compression braking. It took only a press of an overhead console switch  to activate CRAWL and then speed could be varied by turning the speed control knob. The FJ Cruiser walked safely down loose, rocky slopes on which it was dififcult to stand without falling over.

FJ40 heritage may be the theme, but the stock FJ won’t go bush in the same way its predecessor could.

Rear suspension softness is a problem with the FJ Cruiser when towing, even with modest ball weights under 100kg. The rear springs and dampers aren’t set up for towball weight and the vehicle ‘nods’ over undulations. Air-assist springs or stiffer rear coils will do the trick.

Headlight power is adequate for bush touring, but the flat front bumper space is begging for some bling spotties to be fitted. There’s a snorkel already available and an after-market Prado lift kit would help greatly.